Should Australia help "arts" of an ISIS-alike to be performed in Melbourne?

Dear the Hon. Daniel Andrews MP the Premier of Victoria,
Australia is a country we enjoy free expression, but should an Australian government body help ISIS, or its alike, to perform propaganda in a form of "arts" in the Australian soil?
During the past years, ISIS beheaded numerous hostages worldwide, in order to demand ransoms. For examples: 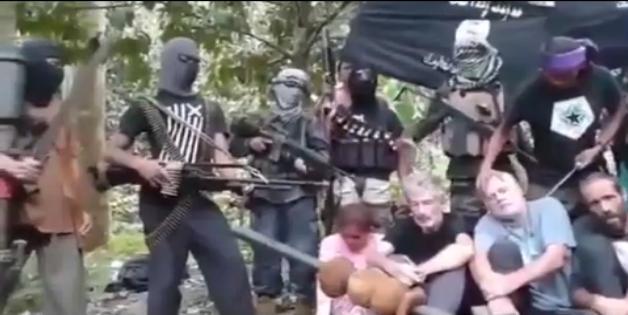 I believe any responsible Australian would answer "no way", but that is what going to be happened in Melbourne in February 2017, by a decision made by you.
Last year, Mr. Premier, you announced that you had invited the Chinese Opera Ballet to perform The Red Detachment of Women in Melbourne in February 2017 See:
http://www.premier.vic.gov.au/melbourne-secures-national-ballet-of-china-showstopper
As an Australian citizen with mainland China origin, I am horribly shocked by the news, because “the Red Detachment of Women” was a branch of the Red Army, which was a terrorist organisation in 1930s, who did exactly the same thing as what ISIS doing today.
On 6 December 1934, the Red Army kidnapped a young missionary couple, John and Betty Stam, together with their 3-month-old baby girl, and asked for $20,000 ransom. After failed to get the demanded ransom, John and Betty Stam were beheaded on 8 December 1934, along with a family of Chinese Christian who had begged for the couple's life. Stams' 3-month-old baby girl, Helen, was abandoned in a house and left to die. She was only lucky to be alive when she was found two days later by the returned residents of the house.
In fact, initially the Red Army soldiers intended to kill the baby before her parents, just because her cry was annoying them. She was spared after a released prisoner questioned the soldiers "Why do you want to kill a baby", but that man then was hacked to pieces in front of the Stams.
For more details of this bloody incident, please refer to:

https://en.wikipedia.org/wiki/Murders_of_John_and_Betty_Stam,
http://www.carlstam.org/familyheritage/jbstam.html,
http://www.actsamerica.org/biographies/2010-08-John-Betty-Stam.html,
http://www.emmanuelenid.org/archive/media-overview/item/1177-triumph-in-death-the-legacy-of-john-and-betty-stam-in-china
Just in less than two months, the communist leaders, Fang Zhimin and Wang Ruchi, who commanded the Red Army division which responsible for the Stams' murder, were captured after their army was defeated by the then government, and were trialed and sentenced to death for their responsibility in beheading Stams. Both men are still labelled by the communist Chinese government as "martyrs". Another commander of that Red Army division which responsible for Stams' murder, Nie Hongjun who escaped from the capture, later became a vice minister in the Chinese central government after the communists captured power in 1949.
The Red Army promoted hatred, violence, brutal killings and terrorist acts, it was the same kind as ISIS, the Nazi SS, or the Khmer Rouge. The communist revolution was a horrible period for so many Chinese people, and “The Red Detachment of Women” evokes a lot of painful memory and fears back to them, and disturbs and tears the communities in Australia, poisons the innocence of young people. No Australian government body should spend Australian taxpayers' money to introduce such an evil thing into Australia.
Someone may say that, “The Red Detachment of Women” promoting women freedom. No! It is not true. In fact, during that time, most young women in the Communist army were forced to marry to much older senior officers. Famous examples include, 17 years old Kang Keqing married to 43 years old Commander-in-Chief Zhu De, 18 years old Zhang Xi married to 40 years old senior commander Chen Yi, 18 years old Wang Ronghua married to 44 years old senior commander Liu Bocheng, 24 years old Jiang Qing married to 45 years old party-leader Mao Zedong, 25 years old Xue Ming married to 46 years old senior commander He Long. etc. Some young women even forced to be "temporary wives" of foreigners in the Chinese communist army. Most of those marriages were arranged by the "organisation" (i.e., the Party). In one case, a young educated woman soldier was forced by the "organisation" to marry to a regimental level officer who was 14 years older than her. The officer was uneducated and irritable, often beat up her and shouted with "I shoot you", and one day the officer beat her so hard that fractures in her left leg. She asked for a divorce, but the "organisation" forbade her from divorce, because "the officer had contributed to the revolution and you should love the revolutionaries." See:
http://zhenhua.163.com/14/1207/12/ACS4UGUV000465TH.html (In Chinese)
Some may argue that, introducing “The Red Detachment of Women” ballet into Australia is just for its artistic values. But you have to remember that it is propaganda “arts” based on false story, to promote hatred, violence, killing and terrorist actions, just the same as Nazi's arts, and ISIS's arts.
During the Nazi Germany era, many Nazi propaganda works and repertories might have even much higher artistic value, do you think it would be appropriate for an Australian government body to introduce them into Australia, or let them to be performed in any Australian government sponsored program?
Each year, ISIS and other terrorist groups recruited so many young people and even children from Australia and other western countries, to join terrorism organisations, and even implemented some terrorist actions in Australia's soil, just as what has happened on 2 October 2015, when 15-year-old boy, Farhad Khalil Mohammad Jabar, .shot and killed Curtis Cheng, an unarmed police civilian finance worker, outside the New South Wales Police Force headquarters in Parramatta, NSW, Australia. Jabar had flew an ISIS flag through Western Sydney in 2014. See:

https://en.wikipedia.org/wiki/2015_Parramatta_shooting
http://www.abc.net.au/news/2015-10-03/nsw-police-headquarters-gunman-was-radicalised-youth/6825028
http://www.smh.com.au/national/parramatta-shooting-the-last-minutes-before-farhad-jabar-commits-murder-20151009-gk57dk.html
http://www.news.com.au/national/freshfaced-westerners-are-being-lulled-into-terrorism-by-isis-propaganda/news-story/8448148e3a0c33c01b95db4dc1bab492
In early 2016, Jake Bilardi, a Melbourne's northern suburbs teenager turned suicide bomber in Iraq, revealed online about how he was recruited by terrorists propaganda. See:
http://www.news.com.au/national/freshfaced-westerners-are-being-lulled-into-terrorism-by-isis-propaganda/news-story/8448148e3a0c33c01b95db4dc1bab492
There is no doubt that ISIS is quite mastered in the arts of propaganda and has strong infection skills. Do you thinks it would be OK to let them openly staged in Australia?
Each year, Chinese Communist government spends huge amount of money in propaganda which promoting hatred and violence against western countries, including propaganda in Australia to against Australian values. Look at Chinese websites, so many brain-washed Chinese ultra-nationalists angrily commented against Australia, and some of them were made within Australia. For example, the Canberra made video calling Australia “stupid running dog of the U.S.”. Is it still not enough to alert us about Chinese Communist propaganda that is poisoning our youngsters to be Chinese version Jihadists? See:

http://www.smh.com.au/world/the-australian-connection-behind-chinas-ultranationalist-viral-video-20160803-gqkiki.html,
http://www.dailymail.co.uk/news/article-3724752/Australian-foreign-student-ultra-nationalist-Chinese-viral-video.html
As a responsible Australian citizen who treasure our society values of freedom, peace, democracy and human-rights, and as a Chinese migrant who flee from the tyranny regime where is full of violence, savage tortures, killings, lies, and propaganda bombard, I urge you to correct the mistake you have made, and withdraw the invitation and cancel the performance of the Chinese terrorism propaganda ballet “The Red Detachment of Women” in Melbourne, in order to protect our community from being tore apart, in order to protect us from horrible nightmares hounding back from terrorism tyranny regime.
Please!
Yours truly
Xiaogang Zhang
1 February 2017


（This article is reprinted from other source. Its contents, analysis and conclusions may not reflect those as supported or advocated by AVA）